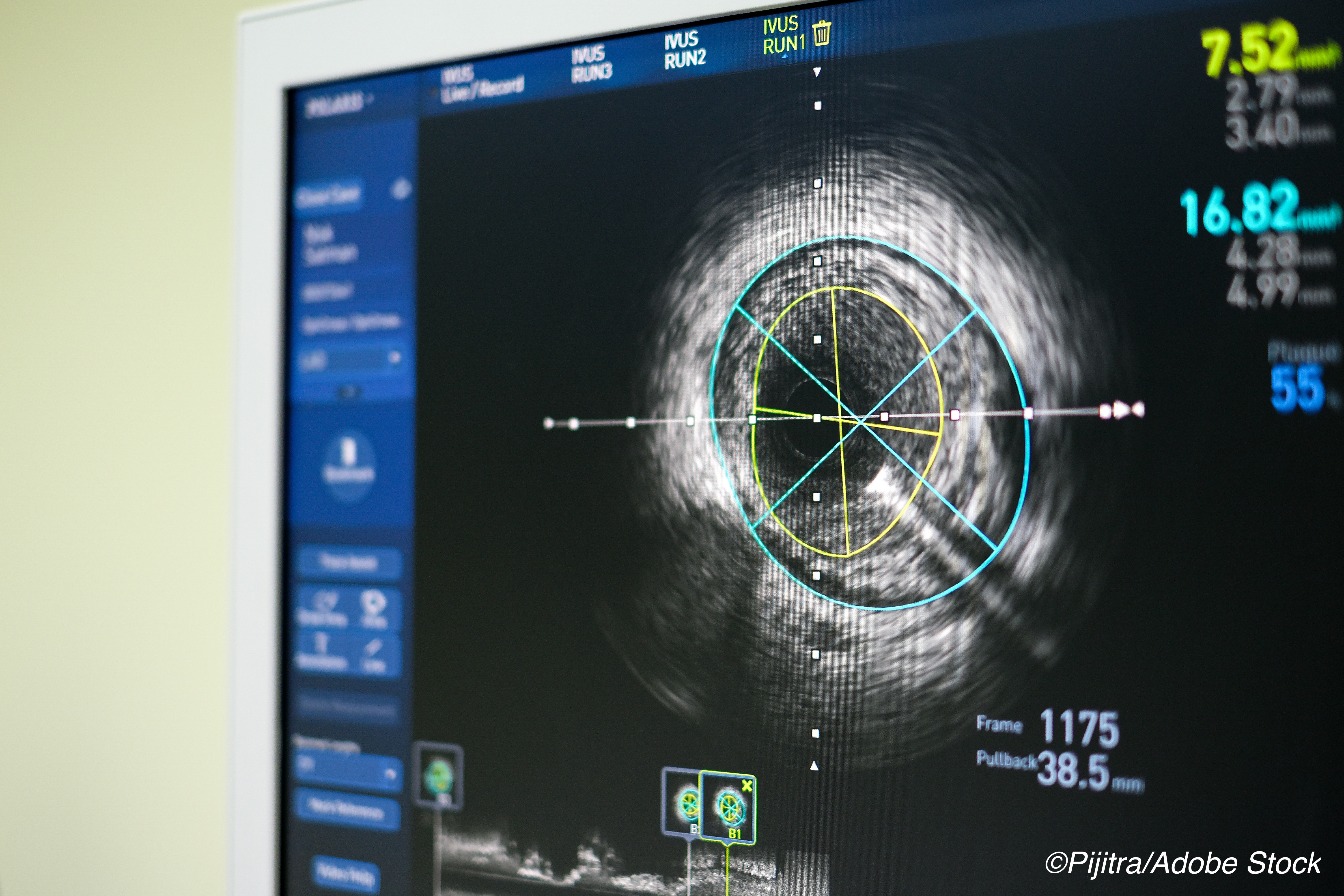 After 3 years, there was a durable benefit for using intravascular ultrasound (IVUS) to guide placement of second-generation drug-eluting stents compared to angiographic guidance.

That finding emerged from the multicenter ULTIMATE trial, which was published in JACC: Cardiovascular Interventions and reported as a late breaking clinical trial at the TCT 2020 virtual meeting.

The trial enrolled “1,448 all-comers undergoing DES implantation who were randomly assigned to either IVUS guidance or angiography guidance,” Zhang and colleagues explained. The participants were followed for 3 years and the primary endpoint was “the risk of TVF at 3 years. The safety endpoint was definite / probable stent thrombosis (ST).”

The patients were evenly randomized to IVUS guidance (n=724) or angiographic guidance (n=724). Average age of patients was 65 and more than 73% were men. In each arm, more than 70% had hypertension, about 30% had diabetes, and a little over half had hyperlipidemia. The majority — 78.6% in the IVUS group and 78.3% in the angiographic group — had acute coronary syndrome.

At trial entry, all “patients were prescribed a loading dose of aspirin (300 mg) and P2Y12 inhibitor (clopidogrel 600 mg or ticagrelor 180 mg) if not undergoing antiplatelet therapy before the procedure,” they explained. “After the procedure, all patients were treated with 100 mg/day aspirin indefinitely and 75 mg/day clopidogrel (or ticagrelor 90 mg twice a day) for at least 1 year. Other medications for secondary prevention of coronary disease, including statins, angiotensin converting enzyme inhibitors, and β-blockers, were prescribed according to the current guidelines.”

“A nationwide population-based registry found better clinical outcomes with IVUS guidance when performing unprotected left main coronary artery stenting during more than 5 years of follow-up. Recently, an American Medicare cohort showed that IVUS was used only in 5.6% of all PCI patients, and IVUS use was associated with lower long-term mortality and repeat revascularization over a median follow-up of 3.7 years. Our results, coupled with these registries, demonstrate that IVUS guided DES implantation improves the long-term clinical outcomes,” they wrote.

Another trial, IVUS-XPL (Impact of Intra-Vascular UltraSound Guidance on Outcomes of Xience Prime Stents in Long Lesions), “reported lower 5-year major adverse cardiac event rates with IVUS guidance than with angiography guidance, mainly due to a reduction in ischemia-driven TLR. There are many differences when comparing our study with the IVUS-XPL with respect to enrolled patients (all-comers vs long lesion), study endpoints (clinically driven TVR vs ischemia-driven TLR), periprocedural MI definitions (within 72 h vs 48 h), loss to follow-up (1.7% at 3 years vs 15% at 5 years), and IVUS criteria (three criteria vs one criterion). Another important finding in our study is that the differences in TLR, TVR, and stent thrombosis between IVUS- and angiography-guided groups, which were statistically nonsignificant at the 1-year follow-up, were significant at 3-year follow-up.”

That said, the authors concluded that both IVUS-XPL and the ULTIMATE trial “verified the gradually increasing clinical benefits of IVUS-guided DES implantation.”

The authors did, however, cite a number of trial limitations, including the randomization method — a sealed envelope system — which they admitted was “not optimal.” Additionally, the study enrolled “relative high risk patients” with complex lesions, which reflects the population seen in high-volume PCI centers in China but may not reflect populations in other regions.

Another limitation was the requirement that “a procedure was only considered optimal if all three criteria were met, which might underestimate the long-term clinical benefits of IVUS guidance. We did not directly compare the clinical outcomes stratified by different IVUS-defined criteria.”

But they concluded that the time has come to “promote IVUS use in daily clinical practice,” they wrote. “Further randomized studies are also warranted to identify the most optimal criteria for IVUS guidance and how to achieve these IVUS-defined optimal criteria.”